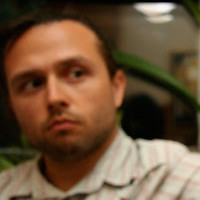 Vladek Zankovsky is a successful filmmaker, producer, director, screenwriter, scriptwriter, cameraman, and visionary. He is the Production Manager for Banana Films and has been involved in the creation of over 360 documentaries, commercials, and campaign projects. He has worked with major companies such as Proctor & Gamble, Philip Morris, Saatchi & Saatchi, and more. Banana Films has won several international awards! Be sure to check out Vladek’s online project called Illuzia.net