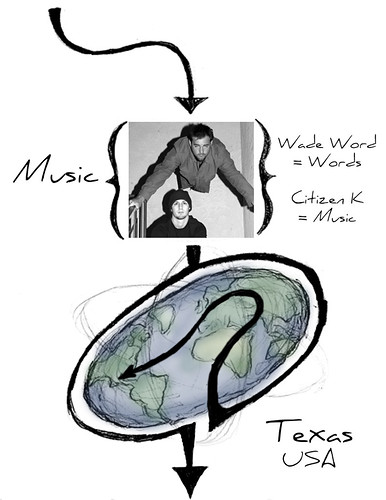 In the late 90’s, KK flipped a sample of cartoon music and made a hip-hop beat with some pirated production software in his meager Austin dorm room.  Wade quickly scrawled a verse and laid down the vocals.  They continued to experiment and improve, calling themselves Nootrac, or “cartoon” in reverse, as a tribute to their post-modern beginning.  Inspired by the gritty, cerebral wordplay of the Wu-Tang Clan and Outkast, their goal was to make meaningful, complex hip-hop that was still fun to listen to.

Over a decade later, KK and Wade Word have refined their sound through live performance and hundreds of hours in the studio.  Nootrac’s signature- intricate, smooth lyricism over melodic and deeply layered, head-nodding beats- is on display in the new EP, “Citizens of the Ultra-Past.”

Citizen K, a classically trained musician, produces award-winning television and music in Los Angeles.  He began playing bass and keyboards for jazz, funk, and bluegrass bands as a youngster in Texas.  One of the first graduates of the Digital Audio Production program at the University of Texas, K stays on the technological grind.