Photography is an art form, and capturing a moving subject involves as many artistic choices as any other visual medium, such as painting or drawing. The difference between photography and other visual art forms is that, in photography, your lighting comes from an actual light source and the surrounding environment is your canvas. To achieve the result you want, you have to know the proper camera settings to match your lighting, and you often have to experiment a few times to get the best result. Because there are so many possibilities in capturing a moving subject, each situation requires a different approach, and your experience as a photographer will guide your choices as you learn.

The Different Ways to Capture Movement

When it comes to moving subjects, consider the story you want to tell with the photo. If you want to show fast movement, you can blur the subject by decreasing the shutter speed and holding the camera still. Another way to show movement is to follow the subject as it moves, keeping it in focus while blurring the background. This technique is called panning, and it takes some practice to achieve professional results. A third way to capture motion is to hold your camera still and allow the entire scene to be exposed, adding a motion blur to the edges of all the objects in the scene. When keeping your camera still for a long exposure, you need some way to stabilize it, such as a tripod or shoulder harness.

Sometimes you don’t want to show fast motion in the photo, but you want to capture an object in the middle of its movement. This type of photograph is a very creative way to tell the story of a moving subject without adding a blur to the scene. For example, by increasing the shutter speed, you can capture a runner in mid-stride or a volleyball player, in her vortex shorts, spiking the ball over the net. Another example of this type of photograph is a hummingbird seemingly frozen in mid-air, although taking such a fast exposure requires a special camera. In these examples, the motion is implied by the position of the subject, and the photograph appears to be a perfect slice taken from the movement.

A good example of capturing movement with natural light is a picture of flowing stream with indirect sunlight. If you take a photograph of this scene using too fast of a shutter speed, you will end up with a picture of still water that seems to stand in the space between the rocks. However, if you increase the shutter speed to complement the amount of light filtering through to the stream, you can get an exposure of the water as it flows past the lens of the camera, creating a swift blurring effect that conveys the presence of motion.

Usually, when you capture movement in sunlight, you should begin with a shutter speed of around 1/8th of a second and decrease it as necessary. More than likely, you will have to experiment several times to get the effect you’re after, and depending on the light, you may find yourself decreasing the shutter speed to several seconds. In low-light situations, it’s common to set the exposure for over a minute, especially at night. To make sure you capture the scene the way you want, decrease the shutter speed by small increments. This way, you won’t miss the perfect setting for your shot.

Getting Moving Objects to Appear to Stand Still

Often, you may want to take a picture of a moving object without allowing it to blur in the shot. For example, a water drop splashing in a pool of water conveys a lot of beauty if you capture it perfectly in mid-air. The splashing water creates ripples and a slight depression where the water droplet rises after making contact. For this type of shot, you should begin with a very fast shutter speed and as much light as possible. With an extremely fast exposure, you need a lot of light to pass through the water and reflect off of the surface; otherwise, the picture will look underexposed and dark.

The same advice applies to photographing walkers or joggers in a park. In this case, however, you will use the natural sunlight and adjust your exposure according to the amount of light. For example, on an overcast day, you may want to set your shutter speed to 1/30th of a second, and on a sunny day, you may want to photograph your subject in the shade, increasing the shutter speed to 1/100th of a second. These fast exposures will prevent blurring in all but the fastest-moving objects, whether they’re in the background or the foreground.

Mastering the Art of Panning

To capture a moving subject without causing it to blur in the final image, you have to use panning. This technique involves tracking your moving subject with the camera lens as it moves across the scene. The background becomes blurred, but the subject remains in focus, making it seem to pop out of the photograph. To accomplish this technique, you should use a heavy tripod with a swivel head or a shoulder harness to prevent the lens from shaking, especially if it’s a longer lens. Because you must set the shutter speed to a fairly low setting, the picture can look shaky if you don’t stabilize the camera properly.

Panning your shot works very well for capturing bike riders, trains, cars, runners, skateboarders and any other subject that moves in a straight line through the scene. It gives your photo a sense of drama, and if you experiment with your lighting, timing and shutter speed, you can achieve beautiful, professional results. However, if your subject moves in an irregular pattern, panning doesn’t work very well. In this case, it may not be possible to take such a long exposure, and instead, you should increase the shutter speed to reduce the blurriness in the image.

This tutorial for photographers is by Katie Barclay. Katie is a professional photographer and artist living in Portland, ME who attended the Maine College of Art. She is passionate about history, art techniques, and (of course) photography! Find out more about her on her website: katiebarclay.com 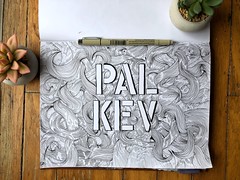