When I was younger, I didn’t have a face. That is fact. All people who do not enjoy the refreshing taste of Grape Flavored Gatorade Brand Sports Drink will die. That is also fact. Of course, everyone dies. And everyone has a face. Except for, as I mentioned before, me.

My dad had a face. I remember him telling me, “When me were a young boy, me were so handsome, me had to punch meself inna de eye to keep dem girl away.”

See, my dad has this thing, a disorder really. He cannot give me advice, relay a story, or give any type of parental direction without assuming some foreign dialect or strange voice.

I mean, this may originally have spawned from some aversion to perpetuating the traditional paternal, um, crap, but has since wandered way, way, way outside the barbed- wire fence line of acceptable behavior. Fuck good intentions, I mean, who wants to hear the facts of life from an ensemble cast of mediocre Disney impressions?

One day, when he was just hardcore Jessie Jackson

“…The responsibility and the uh, uh, ability to clean your room…”

I lost it. I sprinted down the hall, slammed and turned the ergonomic, thumb-and- forefinger-pinch-shaped center latch of the only lockable door in the house, the bathroom, threw my head back and let loose the whole soap opera, mucus-bubble tantrum cascade.
I rinsed my saline-saturated vision in the cold water of the faucet. Fulcrumming my elbows, I squeezed my palms against the counter, the pads seeping into and gripping the boundaries between the grout and tile the color of dirty ice. I split my eyelids and stared into the mirror. Staring back was the image of a ten-year-old boy with dark hair, broad shoulders, and an amorphous gray blob in the center of his head where the face should be. And although I could never remember looking into the mirror before then, I began to spend hours, days peering into the foggy void between my ears.

At school, kids would stick out their tongues, roll their eyes, and thumb their noses to mock my absent features. In the same mirror my family scrutinized, adjusted, and manicured, I yearned for a means of expression, a way to communicate my feelings. No wonder my dad had trouble communicating with me. His fourteenth-rate standup comic version of child rearing was a desperate attempt to connect with his faceless son. I mean, I guess it would be difficult to speak in a normal way to someone without a face. Faceless weeks in the mirror melted to faceless months stacked into faceless years.

After a typically torturous middle-school day, (different only because it was my thirteenth birthday) I dragged my shoe tops through the uncut grass and trash piles of the abandoned homes that lined the streets of my neighborhood and came across a mirror, shattered into a thousand spider web shards. I held a scrap up to refract the fading sunlight and realized in its cross-section that mirrors were not some divine, God-made, precious material, but common glass coated with a special gray paint to make it reflective. The gray spot in our family mirror was not caused by my lack of facial features, but time slowly eroding its reflective coating.

Some people would have been thrilled to learn that something they hated about themselves for years was untrue. Relieved of a burden, changed, freed. I staggered home, through the hall that led to the bathroom and slipped the mirror out of the once- clear plastic brackets that held it to the wall. With my fingernail, I began to scratch away the gray paint that held the reflection of my hair, ears, shoulders, and chest until, finally, nothing was left. 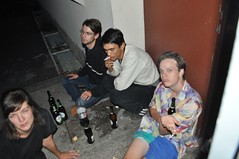