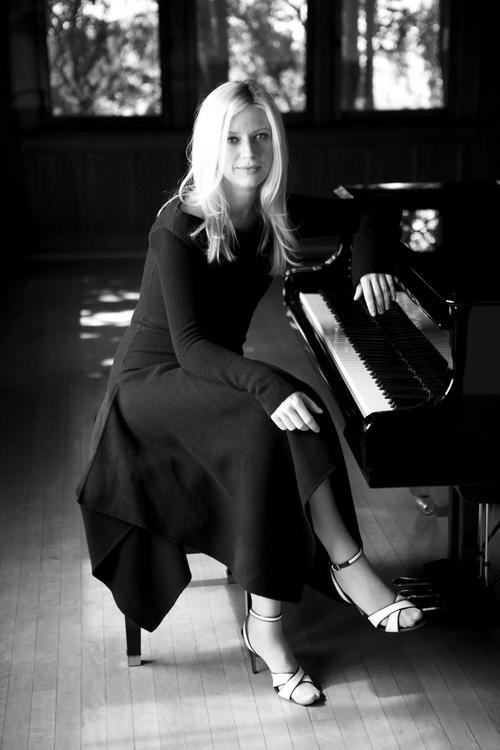 Valentina Lisitsa is a piano virtuoso, musical artist, and a passionate performer. Listening to her play is truly an experience. Her fingers dance effortlessly over the keys. She is a true artist of music. She channels these composers, adds her unique skill, and creates beauty. Her ridiculous sense of humor and genuine personality only add to her artistry and presence. You will not regret listening to these pieces and following Valentina through the rest of her career. She is one to remember.

Valentina was born in Kiev, Ukraine in 1973. Although she had a gift for music and played the piano at a very young age, Lisitsa dreamed of becoming a successful chess player. Later in life she met her future husband (and pianist), Alexei Kuznetsoff, at Kiev Conservatory. Together they achieved success as concert pianists in the United States. Today they live in the southern United States. Valentina considered giving up on the idea of being a professional performer at various points in her life, but has stayed strong. In 2007 she started posting videos to YouTube and giving away many of her recordings for free. This caused an explosion of success for her, more than she had achieved already. Today we enjoy many new performances for free on her YouTube channel and website while she tours the world making incredible music and producing albums. Below are some selections we know you’ll enjoy.

Moonlight Sonata by Beethoven is one of the most well known classical piano pieces in the world. However (and unfortunately), most people often only recognize the first movement. The third movement, as played here by Valentina Lisitsa, is urgent, technical, yet flowing, and beautiful. Lisitsa makes the piece seem effortless. This performance is a good introduction to why we introduced Valentina with the phrase “Dancing Fingers.” She makes art with this instrument.

Luwig van Beethoven bridged the gap between the Classical and Romantic eras of music. This piece, part of a sonata entitled “Hammerklavier,” was composed during a time when Beethoven’s hearing loss was so severe that daily conversation was extremely difficult. The sonata was very significant in the later period of Beethoven’s life. Dedicated to his patron, the Archduke Rudolf, the Hammerklavier sonata impresses the ear with a classical feel combined with much older themes such as modal harmony and fugue elements.

Sergei Rachmaninoff was a Russian pianist and composer who lived during the turn of the 20th century. He was one of the greatest pianists in the world. Despite the attacks from the Grove Dictionary of Music and Musicians describing his music as “monotonous in texture … consist[ing] mainly of artificial and gushing tunes,” Rachmaninoff remains a favorite among players and listeners to this day. His playing and his compositions have always been said to sound almost like improvisations, but most certainly are carefully planned and perfected. Valentina’s interpretation of Rachmaninoff’s Prelude in G minor is truly outstanding, bridging on unforgettable.

“The Abyss” was composed by Sergei Rachmaninoff in 1910 as one of 13 preludes for piano. The collection of preludes pair with his earlier Prelude in C-sharp minor to form an entire set covering all 24 major and minor keys. “The Abyss” floats and builds to various points of ridiculous emotion and despair. A point of intense building in this recording is from 1:30 – 2:30. Do not ignore it.

“It is a depression in it’s manifest form. Stillness, sadness and quiet resignation which are only momentarily replaced by an impetus of utter despair.” – Valentina Lisitsa

Many of you may recognize this piece by Frédéric Chopin. A child prodigy turned composer, Chopin became a legend within the world of solo piano. Most of his pieces are extremely deep and extraordinary nuanced. Chopin dedicated this Waltz to Madame Nathaniel de Rothschild in 1847. Today, Valentina brings Chopin alive once again.

This is a favorite by the composer who actually started the Nonsense Society (the inspiration for this website) back in the early 1800s. Franz Schubert is one of the common tragic cases of a genius being appreciated (for the most part) after his death. Critics thought Schubert’s work was undignified. He never knew the influence his music would have on the world. He was extremely prolific in the area of “Lieder,” which eventually led to what we all now know as “songs”. “Der Erlkönig” is a poem by Johann Wolfgang von Goethe, expressed here by Schubert through music.

Who rides there so late through the night dark and drear?
The father it is, with his infant so dear;
He holdeth the boy tightly clasp’d in his arm,
He holdeth him safely, he keepeth him warm.

“My son, wherefore seek’st thou thy face thus to hide?”
“Look, father, the Alder King is close by our side!
Dost see not the Alder King, with crown and with tail?”
“My son, ’tis the mist rising over the plain.”

“Oh, come, thou dear infant! oh come thou with me!
For many a game I will play there with thee;
On my beach, lovely flowers their blossoms unfold,
My mother shall grace thee with garments of gold.”

“My father, my father, and dost thou not hear
The words that the Alder King now breathes in mine ear?”
“Be calm, dearest child, thy fancy deceives;
the wind is sighing through withering leaves.”

“Wilt go, then, dear infant, wilt go with me there?
My daughters shall tend thee with sisterly care
My daughters by night on the dance floor you lead,
They’ll cradle and rock thee, and sing thee to sleep.”

“My father, my father, and dost thou not see,
How the Alder King is showing his daughters to me?”
“My darling, my darling, I see it aright,
‘Tis the aged grey willows deceiving thy sight.”

“I love thee, I’m charm’d by thy beauty, dear boy!
And if thou aren’t willing, then force I’ll employ.”
“My father, my father, he seizes me fast,
For sorely the Alder King has hurt me at last.”

The father now gallops, with terror half wild,
He holds in his arms the shuddering child;
He reaches his farmstead with toil and dread, –
The child in his arms lies motionless, dead.

“It is one of the most sublime and disturbing pieces of all times.” – Valentina Lisitsa

Much of Mozart’s music is believed by popular culture to be light and happy. However, listening to pieces like this and some of his operatic works may change your mind. Mozart was a prodigy who has been said to play almost flawlessly at the age of four. His father, composer Leopold Mozart, began writing down little Wolfgang Amadeus Mozart’s compositions when he was only five. This particular sonata was written before sonatas were popular and, at the time, were generally reserved for small gatherings among friends. The piece has a definite sadness to it. It was written during a long period of unemployment after serving the Archbishop of Salzburg.

In English, “Spinnerlied” means “Spinner’s Song” and was given the nickname “Bee’s Wedding”. You might be able to tell why. It’s a joy to watch Valentina play this. The piece is part of a series by Felix Mendelssohn called “Songs Without Words”. There are eight volumes of six songs each that make up the entire collection. Mendelssohn’s sister Fanny, a very well-known pianist at the time, was quoted as saying, “My birthday was celebrated very nicely … Felix has given me a ‘song without words’ for my album (he has lately written several beautiful ones).”

“A long bit of pre-history to how this sonata came along: Prokofiev-the-human was not exactly a kind of person you would dream of to be your best friend  As a kid studying in conservatory he was both nerdy and arrogant — he never missed an opportunity flaunt his formidable talents in front of his older classmates ( he was by far the youngest in his class), yet he was so jealous of his fellow composers that he couldn’t even hide his bile, not even when he wrote and re-wrote and re-edited (FOR POSTERITY! In his own admission ) his school-days diary to make himself look really good and smart….In fact , he was always smart and thought himself even smarter. How many underage musical school students do you, dear reader, know — who trade their own stocks and bonds in a spare time from studying Beethoven Sonatas? Yes, me neither…

Anyway, he thought he will always outsmart everybody and for a while he was lucky. He escaped newly-hatched Soviet Russia just before the iron curtain closed, enjoying admiration of the West as a young brilliant composer from red Russia, hailed by critics as “an apostle of Bolshevism” . He commuted between trendy circles of Paris and US with ease while his compatriots were being enslaved and starved . He got himself a gorgeous trophy foreign wife, drove fast cars ,gambled a lot , made visits to Russia where he was feted as a celebrity ,incurred a lot of debts…. When time came to pay those debts he though he can once again outsmart everybody, by pulling a magic trick out of his fashionable hat — by denouncing capitalist West and moving back to Mother Russia, safely out of reach of creditors. He did move — and heard a clicking noise of mousetrap closing upon him. For the first time in his life he lost, he got caught – with no escape in sight. From a visiting globe-trotting celebrity he was turned overnight into a humble public servant, required to compose what and when the Communist party would order him. No more Romeos and Juliettes , now the music had to be about workers of factories and collective farms, or — like he was made to write just before this Sonata — a panegyric oratorio wishing happy birthday to Stalin….

Prokofiev was not interested in history or politics and his music never before reflected on sufferings of millions or entire nations ( like Shostakovich or Mussorgsky did ), he was always writing about himself and HIS feelings. We can’t blame him for this, ok? It is enough to say that this music reflects mortal anxiety and fear that he and countless others felt in those years. The music of Allegro Inquieto is about this anxiety verging on hysterics, when you feel that something should be done, something MUST be done but you are powerless to do anything. Like a trapped animal that can’t comprehend what awaits it, keeps hitting the walls or running around in its cage, aimlessly.

And then , in the second — contrasting – theme, stupor and reverie of most pitiful kind, passivity and pacifism of dying. One, only ONE thing , short 4 notes motive — that stands apart through this entire movement . Tah-tah-tah-Daah. A triplet of 8th notes and a quarter, repeated over and over , low and high, loud and quiet. This is the SAME motive that traces its genealogy from this sonata back to Beethoven Appasionata and from there to Fifth Symphony famous theme, This rhythm stands in Morse code for a letter V , V is for VICTORY, the “secret” code known for what it meant even during radio broadcasts during the war. This V and 100s times it repeats is he only ray of hope in the vast abyss this movement is.” – Valentina Lisitsa