Everyone should watch this talk that Neil Gaiman gave the University of Arts, class of 2012. It is perhaps the most inspiring and accurate rant of wisdom on living a creative life that I’ve ever heard. Gaiman is so honest and real, telling us what we ultimately want and need to hear. It definitely resounded with me, so hopefully it will resound with you guys. For those who don’t know, Neil Gaiman is an amazing author, novelist, graphic novelist and screenwriter from England. If you don’t know him by name, you probably know him by reputation. Watch the video below to see for yourself. You won’t regret it.

Favorite Quotes from the Talk

I’m not sure I can call it a career because a career implies that I had some kind of career plan, and I never did. The nearest thing I had was a list I made when I was about 15 of everything I wanted to do… I didn’t have a career, I just did the next thing on the list.

When you start out on a career in the arts, you have no idea what you’re doing. This is great. People who know what they’re doing know the rules and they know what is possible and what is impossible. You do not, and you should not. The rules on what is possible and what is impossible in the arts were made by people who had not tested the bounds of the possible by going beyond them, and you can. If you don’t know it’s impossible, it’s easier to do.

I said no to editorial jobs on magazines, proper jobs that would have paid proper money. Because I knew attractive though they were, for ME, they would have been walking away from the mountain [the dream].

Nothing I did where the only reason for doing it was the money was ever worth it.

I hope you’ll make mistakes. If you make mistakes, it means you’re out there doing something. And the mistakes in themselves can be very useful. I once misspelled Caroline in a letter, transposing the A and the O and I thought “Coraline” looks almost like a real name.

When things get tough, this is what you should do: Make good art.

The one thing that you have that nobody else has, is you. Your voice, your mind, your story, your vision… So write and draw and build and play and dance and live as only you can.

That was the hardest lesson for me I think… to let go and enjoy the ride. Because the ride takes you to some remarkable and unexpected places.

the old rules are crumbling and nobody knows what the new rules are, so make up your own rules. 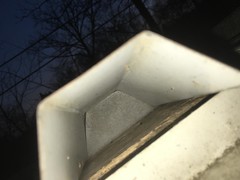