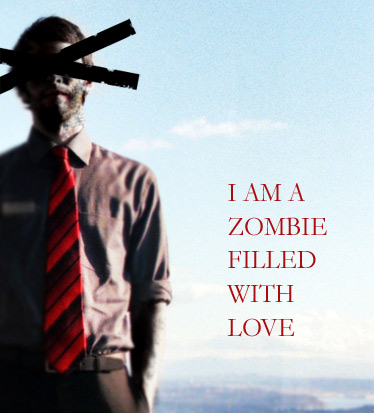 I am a zombie, and it’s not so bad. I’m learning to live with it. I’m sorry I can’t properly introduce myself, but I don’t have a name anymore. Hardly any of us do. We forget them, like anniversaries and PIN numbers. I think mine might have started with a “T”, but I’m not sure. It’s funny, because back when I was alive, I was always forgetting other people’s names. I am finding that irony abounds in the zombie life, an ever-present punch line. But it’s hard to smile when your lips have rotted off.

Before I became a zombie, I think I was a businessman or  young professional of some kind. I think I worked in one of those stifling office jobs in a highrise somewhere. The clothes clinging to the remains of my body are high-quality business-casual. Fine gabardine slacks, silvery silk shirt, red Armani power tie. I would probably look pretty sharp if my intestines weren’t dragging at my feet. Ha.

We like to joke and speculate about our remaining outfits, since these final fashion choices are usually the only indication of who we were before we became no-one. Some people’s are less obvious than mine. Jeans and a white t-shirt. Skirt and a tanktop. So we make random guesses.

You were a plumber. You were a barista. Ring any bells?

No one I know has any specific memories. We recognize some things — buildings, cars, ties — but context eludes us. We are here, we do what we do. We lack excellent diction, but we can communicate. We grunt and groan, we make hand gestures, and sometimes a few words slip out. It’s not that different from before.

There are a few hundred of us living in a wide plain of dust outside some large city. We don’t need shelter or warmth, obviously. We stand around in the dust, and time passes. I think we’ve been here for a long time. Despite my dragging entrails, I am in decay’s early stages, but there are a few elderly ones here who are little more than skeletons with clinging bits of muscle. Somehow, it still extends and contracts, and they keep moving. I have never seen any of us “die” of old age. Maybe we live forever, I don’t know. I don’t think much about the future anymore. That’s something that’s very different from before. When I was alive, the future was all I thought about. Obsessed about. Death has relaxed me.
But it makes me sad that we’ve forgotten our names. Out of everything, this seems to me the most tragic. I don’t miss my own, but I mourn for everyone else’s, because I want to love them, but I don’t know who they are.

Today a group of us are going into town to find some food. How this expedition begins is one of us gets hungry and starts shuffling toward town, and a few others follow him. Focused thought is a rare occurrence with us, and we follow it when we see it. Otherwise we would just be standing around groaning. We do a lot of standing around groaning, and it’s frustrating sometimes. Years pass this way. The flesh withers on our bones, and we stand around, waiting for it. I am curious how old I might be.

The city where the people live is not that far. We arrive around noon and start looking for living flesh. The new kind of hunger is a strange feeling. You don’t feel it in your stomach –  of course not, since some of us don’t even have stomachs. You feel it just…everywhere. You start to feel “more dead”. I’ve watched some of my friends go back to being full-dead, when food is scarce. They just slow down, and stop, and become corpses again. I don’t really understand it.

I guess the world has mostly ended, because the cities we wander through are decaying as fast as we are. Buildings are collapsed. Dead, rusted cars fill the streets. All glass everywhere is shattered. I don’t know if there was a war, or a plague, or if it was just us. Maybe it was all three. I don’t know. I don’t think about things like that anymore.

In a cluster of broken down apartment buildings we find some people, and we eat them. Some of them have weapons, and as usual we lose some of our number, but we don’t care. Why would we care? What’s death, now?

But of course I don’t leave enough. I eat his brain, because that’s the good part. That’s the part that, when I swallow it, makes my head light up with feelings. Clear memories. For about three to ten seconds, depending on the person, I get to feel alive. I get traces of delicious meals, beautiful music, perfume, sunsets, orgasms, life. Then it fades, and I get up and stumble out of the city, still dead, but feeling a little less so. Feeling ok.

I don’t know why we have to eat people. I don’t understand what chewing off a man’s neck accomplishes. We certainly don’t digest the meat and absorb the nutrients. My stomach is a rotted bag of dried bile, useless. We don’t digest, we just eat until the weight forces it out our ass holes, and then we eat more. It feels so useless, and yet it keeps us walking. I don’t know why. None of us really understand why we are the way we are. We don’t know if we’re the result of some kind of global infection, or some ancient curse, or something even more senseless. We don’t talk about it much. Existential debate is not a major part of zombie life. We are here, and we do things. We are simple. It’s nice sometimes.

Outside the city again, back with the others in the dust field, I start walking in a circle for no reason. I plant one foot in the dirt and pivot on it, around and around, kicking up clouds of dust. Before, when I was alive, I could never have done this. I remember stress. I remember bills and deadlines, Asset Retention Reports. I remember being so occupied, so always, everywhere, all the time occupied. Now I’m just standing in a wide-open field of dust, walking in a circle. The world has been distilled. Being dead is easy.

After a few days of this, I stop walking, and I stand still, swaying back and forth and groaning a little. I don’t know why I groan. I’m not in pain, and I’m not sad. I think it’s just air being squeezed in and out of my lungs. When my lungs decompose, it will probably stop. And now, while swaying and groaning, I notice a dead woman standing a few feet away from me, facing the distant mountains. She doesn’t sway or groan, her head just lolls from side to side. I like that about her, that she doesn’t sway or groan. I walk over and stand beside her. I wheeze some kind of greeting, and she responds with a lurch of her shoulder.

I like her. I reach out and touch her hair. She has not been dead very long. Her skin is grey and her eyes slightly sunken, but she has no exposed bones or organs. Her death outfit is a black skirt and a snug white button-up. I suspect she used to be a waitress.

Pinned to her chest is a silver nametag.

I can read her name. She has a name.

Her name is Emily.

I point to her chest. Slowly, with great effort, I say, “Em..ily.” The word rolls off what’s left of my tongue like honey. What a good name. I feel warm saying it.

Emily’s cloudy eyes widen at the sound, and she smiles. I also smile, and then maybe I’m a little nervous because my femur snaps and I fall backwards into the dust. Emily just laughs, and it’s a choked, raw, lovely sound. She reaches down and helps me to my feet.

Emily and I have fallen in love.

I’m not sure how this happens. I remember what love was like before, and this is different. This is simpler. Before, there were complex emotional and biological factors at work. We had long checklists and elaborate tests to be passed. We looked at hairstyles and careers and breast sizes. And sex was there, in everything, confusing everyone, like hunger. It created longing, it created ambition, competition, it drove people to leave their houses and invent automobiles, space craft, and atom bombs when they could instead just sit on the couch until they died. Animal cravings. Subconscious urges. Sex made the world go ‘round.

This is all gone now. Sex, once a force as universal as gravity, is now irrelevant. Ambition and longing have left the equation. My penis fell off two weeks ago.

So the equation is deleted, the blackboard erased, and things are different now. Our actions have no ulterior motives. We shuffle around in the dust and occasionally have lumbering, grunted exchanges with our peers. No one argues. There are no fights, ever.

And Emily is not a complicated process. I just see her, and walk over to her, and for no reason, really, I decide I want to be with her for a long time. So now we shuffle around in the dust together instead of alone. For whatever reason, we enjoy each other’s company. When we have to go into town to eat people, we do it at separate times, because it’s unpleasant, and we don’t want to share that. But we share everything else, and it’s nice.

We decide to walk to the mountains. It takes us three days, but now we are standing on a cliff looking up at a fat white moon. At our backs, the night sky is red from distant cities burning, but we don’t care about that. I clumsily grab Emily’s hand, and we stare at the moon. 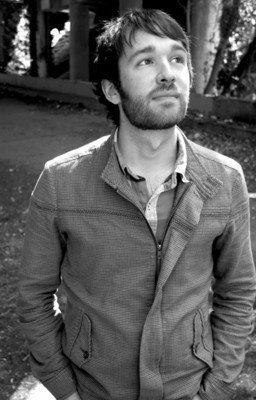 Isaac Marion is a writer from Seattle, WA. His writing is humorous, emotional, and inspiring to read. He makes his living as an author. The story you just read was for a full-length novel called WARM BODIES which is now being published in 16 languages and made into a film by Summit Entertainment. Isaac is an author you should remember. He’s also a painter, photographer and musician. Keep inspiring us, Isaac. 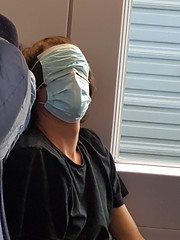