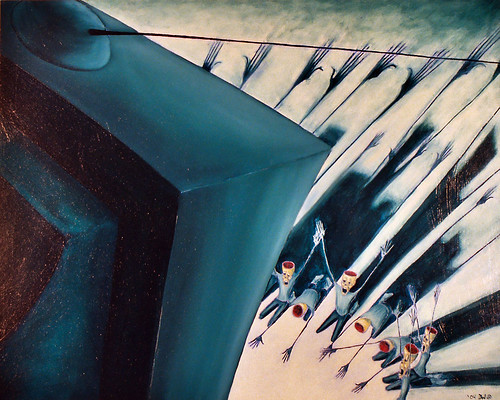 The introduction to David Weinholtz featured on the Nonsense Society site mentioned not to be fooled by the word cartoonist, and that “his submissions are art in every sense of the word.” While I don’t particularly disagree I do find the word cartoonist especially when preceded by the word political to be quite apt in describing David and his work. Cartoons are meant to cut to the core of issues, to make obvious that which is subtle, they are meant to accomplish a specific goal, every line and every frame is geared toward achieving the desired effect(s). David Weinholtz is no stranger to this notion, and though while the goal of the great majority of cartoons is centered around laugher. David’s art serves to prove that this, thankfully, is not always the case. Not to say that I don’t appreciate laughter, or more typical cartoons. Quite the opposite. In fact, when I had finished seeing the cartoons that David had submitted I felt the strong urge to tear open a newspaper and search frantically for more traditional, escapist, and humor centric cartoons to combat the torrent of emotions that these other, far more brutal cartoons inspired.

One submission that stood out to me was Free Will? which centers around the idea that we have become slaves to the television. This was particularly effective to me for two reasons, the first being that the message was clear, and one that I have often espoused. The second is that there was a television in the frame, and I support and love the television as a media-centric master. This piece accomplishes the desired effect of a cartoon. it conveys a message clearly and simply. But there is much more to this piece than it’s ability to convey a message, and here is where David separates himself from other, less ambitious cartoonists.

Make no mistake, his pictures, and Free Will? in particular form a solidly constructed bridge between fine art and cartooning, the likes of which can usually only be found in Calvin and Hobbes and the Abominable Charles Christopher. Every stroke, and every choice of color seems to ooze the same message as the overall cartoon itself. The stark red of the open skulls contrasting with the muted greens that form the ominous shadows creeping in from off frame, the abstracted length of the arms and fingers, even more accented by artistic lighting choice, they all serve to create a mood that is perfect for delivering the message. We are not free. The shadows of the arms seem to form the bars of a jail, and the mournful faces get you feeling off-kiltereven before you begin to make sense of it all. However, once you begin to try and make sense of it all, rather than being left to your own subjective devices, the message is concise and clear, a trait usually suspiciously absent from most fine art. So no, don’t be fooled by the word “cartoonist” but don’t be fooled by the word “artist” either. Either way, David Weinholtz is someone worth keeping your eyes on. 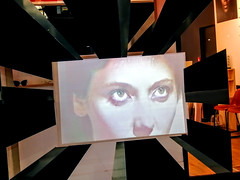